I’m like an animal, basically,’ Bay Garnett is telling me over her kombucha and an oat milk latte, sitting in a buzzing little café near her home in Shepherd’s Bush. She is in a snug, oversized grey jumper worn under a boxy brown overcoat, with a handful of gold chains slung around her neck and a black leather Gucci horsebit bag by her side. Garnett has rightly been dubbed the ‘Queen of Thrift’: renowned for her fashion styling, avid promotion of all things second-hand, and her close-knit bunch of friends including Kate Moss and Charlotte Tilbury, who are always happy to lend a helping hand to the cause. Enthused and electrically animated, she is explaining the nature of the chase when it comes to charity shopping.

‘I’ve lost sunglasses and everything, because I will be in the market, see something I love and charge. All my clothes will come off on the floor. I’ll hear, “Whose are these glasses, whose is this coat?” behind me. It’s all a bit compulsive really,’ she says.

Working with Oxfam for the past six years as its senior fashion advisor, Garnett has been set on channelling her carnal desire to hunt down the best vintage clothes for good. She has curated Selfridges pop-up shops, hosted second-hand sourced runway shows and this morning is in the midst of stringing together a one-day-only shopping extravaganza, set to take over Notting Hill’s historic St Peter’s church on 23 April.

‘I like the idea of this classic, old-school fundraiser sale,’ she says. ‘But it’s no jumble sale. It’s good stuff.’ Think less car-boot tat, more A-lister’s collectables. Alongside Moss and Tilbury who have donated, Garnett has got the goods from Mark Ronson, Victoria Beckham and Solange Azagury-Partridge. She has had contributions from Fortnum & Mason, Alexander McQueen and Chanel, plus a hearty dumping from Vivienne Westwood. ‘She really believes in Oxfam,’ Garnett says. ‘She’s a massive supporter.’

The nine-section super sale ranges from nearly new designer plucked from closets (‘just imagine walking into a great concession store,’ she says) to her specially sourced vintage, which includes a certain handsome Seventies Saint Laurent cape. There will also be a silent auction of niche pieces and prints donated by the likes of stellar stylist Venetia Scott. Garments stuffing the rails will set you back about 10 to 30 quid, so plenty of room for a bargain, while she hopes bidding climbs on the selection of best bits.

I’ve lost sunglasses and everything, because I will be in the market, see something I love and charge

Proceeds are going to Oxfam’s Emergency Relief Fund, which, Garnett points out, includes Ukraine but is distributed between 25 areas in crisis. ‘It’s for Afghanistan. In East Africa people are starving, Yemen people have nowhere to live, and Congo. Amazing amounts of funds have been raised for Ukraine, and that is fantastic. I felt quite strongly about this [reaching] across the world,’ she says. ‘That’s the point of it. Raising money. And also for good vibes.’

Eager to get the vibes just right, there are a couple of sticky thrift etiquette queries I want to iron out with Garnett beforehand. Our coffee is finished, so we decide on a quick-fire round.

Is vintage fur acceptable? ‘Yes,’ she says. What about second-hand shoes? ‘Always! Except my feet are too big.’ Earrings? ‘I’ve tried them on second-hand in shops before.’ When is it okay to buy something new? ‘When you really, really love it — you have to. The less you do it, the more you love it when you do.’ Is it ever okay to shop fast fashion? ‘If you have concerns about the exploitation of the planet or people then it’s not okay. But I also think for people who don’t have the resources, it’s very hard to be judgemental.’ Does Bay Garnett ever get tempted by one of these high street chain-store deals? ‘Never,’ she says, adamantly. ‘I’m too much of a clothes snob.’

If there is anything else you’re burning to ask her, do it at the sale. ‘I want that beautiful, fine balance where it is just lovely and crowded, where people are chatting,’ she says. So prepare for browsing, shopping heaps of exceptional designs and, hey, you might even catch Kate Moss getting elbow deep among the hangers. As Garnett would say, no one is above that zingy thrill of finding the perfect one-off.

Thu Apr 14 , 2022
EXPLORING INDONESIAN HERITAGE THROUGH CLAUDE’s EYES JAKARTA, Indonesia, April 8, 2022 /PRNewswire/ — Praised for its creative pleated designs, the independent Indonesian-based fashion brand Claude ventures out to launch its first ever modest wear collection entitled, NOESANTARA. Just in time for welcoming the beautiful month of Ramadan and under the […] 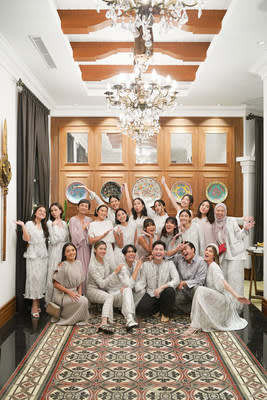