Donald Trump’s hair is back in the news amid the New York Times report that on his unearthed tax returns, he wrote off “more than $70,000 to style his hair during The Apprentice” — but his locks have long been a fascinating topic.

While the New York Times report is vague and there many unknowns — was it $70,000 a year or $70,000 over the 11 years he appeared on the reality show, it didn’t specify — we couldn’t resist picking hairstylist to the stars Ted Gibson’s brain about the pricey expenditure. After all, Trump’s locks are notorious, mostly because they’re puzzling, and Gibson is notorious himself, as the hairstylist with the most expensive haircut in the U.S. — at $2,400.

“I think that if it’s $70,000 in a year,” Gibson says to Yahoo Entertainment, “that’s a lot of money. It’s an exorbitant amount of money, of course,” of the figure, which is more than the median U.S. household income.

Especially for someone whose hair has looked “the same” for more than a decade.

“Sometimes the cut is a little different than other times, but generally it’s the same coif every single day,” the hair pro continues. “So I wonder if ‘beauty’ would be included,” in the $70,000. “Is it also spray tans? Obviously, his hands are a different color,” than his face, “which is usually a sure sign than some kind of tanning is involved.”

And if it’s $70,000 over the 11 years Trump was on The Apprentice, the Starring By Ted Gibson salon owner says, “it’s not a lot of money” for a celebrity — breaking down to approximately $6,363 a year. But either way, “I suspect that if he was getting his hair done for The Apprentice, production has a budget for that. That wouldn’t come out of his pocket.”

And it seems unlikely that Trump has a pricey hair coloring bill. After all, his former hairstylist on the early seasons of The Apprentice, Amy Lasch, has said that his hair coloring wasn’t a professional job, in her opinion, because it was different shades. Lasch speculated that “someone in his inner circle” was doing the color, suggesting “his wife or maybe his daughter,” referring to Melania Trump or Ivanka Trump.

Gibson can see Trump being a DIY color guy, explaining, “As a busy person myself, I color my own hair. I generally cut my own hair because I don’t have a lot of time to go to a barbershop — and I own a salon!” He explains that if he looks in the mirror on a given morning and thinks he needs a trim, he just does it himself and that goes for color too. (It helps that he’s married to a hair colorist, Jason Backe, who’s also his business partner.)

“I’m assuming that he colors his hair himself,” says Gibson, who doubts Melania helps. “No way. She doesn’t even want to hold his hand, so she’s probably not going to touch his hair.”

We mention how Trump’s barber of 30 years, Adrian Wood, from Paul Molé Barber Shop in Manhattan, said in an interview that he was never allowed to cut the top of the reality star’s hair when he was giving him his $30-something gentleman’s cut. Wood was only allowed to clean up the sides. The top was a no-touch zone.

“I believe that,” Gibson replies. “So more than likely, he would go to the barbershop every two weeks and they would just clean up around his ears … and everything else would stay the same. He wants that top to be longer to cover up a certain spot, I’m sure.”

As for the top, “We know that it’s a comb-over. We know that the piece on the top is a lot longer,” Gibson says.” And “it doesn’t move. If the wind blows, the whole thing blows. So it could be that he trims it himself around the ears and back. I just cannot see that it would warrant $70,000 on a tax return.”

One thing is for sure, Trump’s hair is a captivating thing.

“It always has been,” says Gibson, who’s not surprised that Trump has left it the same all these years despite the endless scrutiny. “I think it’s his signature. After getting so many comments on it, why would you change it? If he changed it, he would turn into someone else. And obviously, he likes himself.”

Gibson has worked with some of the most famous celebrities of all time and that continues as he and his husband Backe opened up a futuristic L.A. smart salon, Starring By Ted Gibson, which is home to his famous $2,400 cut.

“It is an experience,” he says when asked what a customer gets for the price tag. “The thing about what I deliver is you have six degrees of separation from celebrities like Angelina Jolie, Sandra Oh, Debra Messing, Lupita Nyong’o, Hailey Bieber, Ashley Green and Zoe Saldana — the list goes on and on,” he says of his famous clientele.

Celebrity connections aside, “it’s the first smart salon in the world, powered by Amazon and Alexa,” he explains. When they designed it, “We used the idea of: What would a salon of the future look like? Because going to a salon and the salon business hasn’t been updated in forever. We wanted semi-private areas where a woman could sit and get her hair done — like when you’re flying first-class and you have your own little area,” or pod, “where you have music, your food and beverage. So that’s what we came up with.”

Their clients have their own “clouds,” which are 13-feet high, by nine-feet long by eight-and-a-half feet wide. They are decorated beautifully, including 11 different light modes, all put on and off by Alexa, so customers can see how their hair color looks under different kinds of light, so there are no surprises when you later look at your hair color at home in the bathroom mirror. There are also mood-enhancing lights, so if a client is having a stressful day, they put on the “chill” mode and the “cloud turns to this really beautiful blueish color.”

The salon, which only opened 11 months before the pandemic, was also “COVID safe before there was a need to be COVID safe.” That’s because of the more than six feet between clouds, but also that clients book and pay for their appointments online. When they arrive, there’s a secure front and back entrance. And there are no touch points between stylist and client — no front desk attendant or assistants — they go right to their cloud and interact only with the stylist. If you like a product used by the stylist, you can order it on the app and get it sent to your home within days, as no retail products are sold in the store.

“And you get a great haircut!” on top of that, Gibson says. “We really thought about what the salon experience should be for women — before it was even a thought about how it feels going to a salon and being in an enclosed in space” amid the pandemic. “We’re really proud of it.” (While Gibson’s cuts are $2,400, haircuts and colors with lead stylists other than Gibson and Backe begin at $150 a cut.)

As we wrap up, we ask if there’s anything Gibson wants to add after our chat about Trump’s hair, “Um… vote!” he says. “That’s all I’ll add. Vote.”

Fri Oct 2 , 2020
A WOMAN was left blind in one eye and partially sighted in the other after glue from false eyelashes fell into her eye at a beauty salon. The 41-year-old had the beauty procedure done in the city of Porto Velho, the capital of the western Brazilian state of Rondonia. 3 The woman, […] 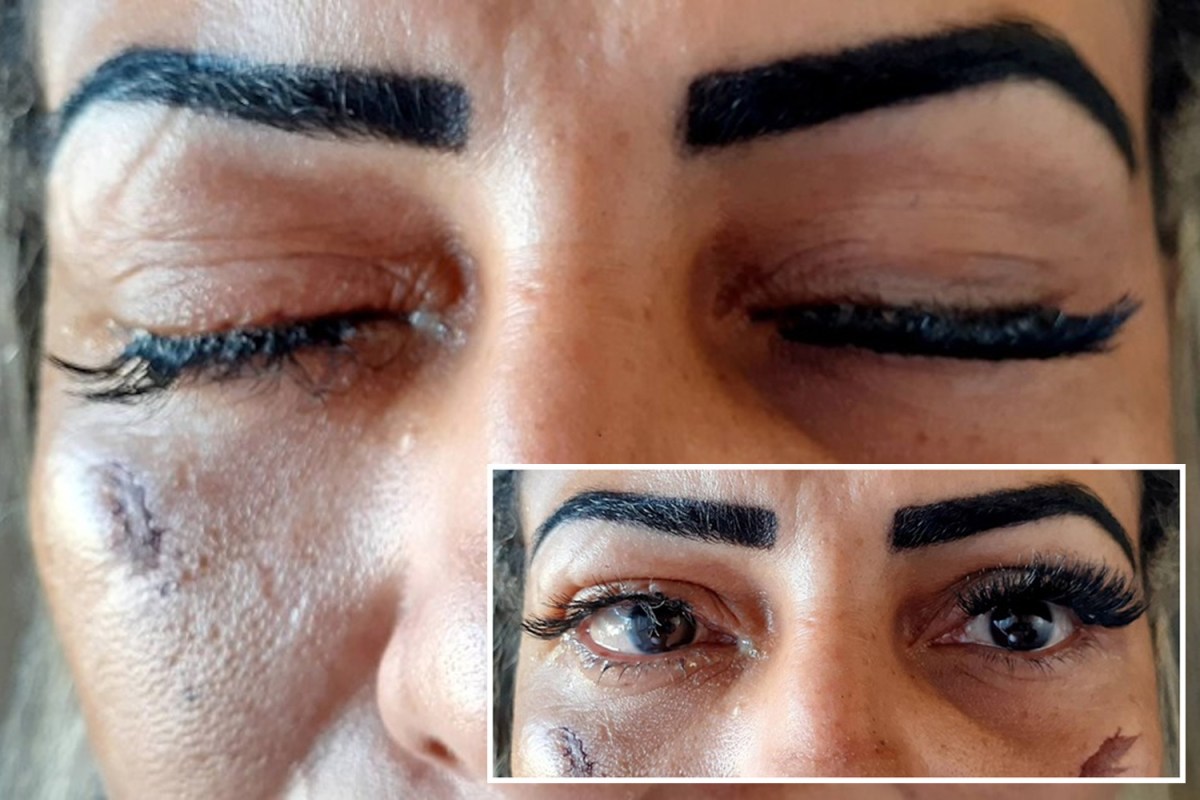